You can’t always trust what you read and see on social media.  I went to Washington DC on January 5 and 6, 2021, to witness Trump’s last gathering in a city I know very well and, then more from a sense of curiosity, to see how it would be portrayed in the media.

I didn’t realize going to the Capitol to attend a lawful assembly would allow me in a small way to approach my husband’s post-Vietnam malaise.  A young Ron Ray volunteered to serve our nation and did so honorably and with distinction in Vietnam, but upon returning home he was spat upon, in uniform, by a stranger in the airport.

The media was hellbent on dividing the American people over Vietnam, a war “against communism,” I might add. Their target became the military, America’s sons and daughters who were dying in staggering numbers eventually reaching 58,000+, a number only to grow later with war-related maladies.  The hate-filled animus the media propagated lasted over a decade only beginning to resolve when President Ronald Reagan officially welcomed the vets home and declared Vietnam a “noble cause.” Still Vietnam vets stood together to manage the corporate shame, going so far as to fund and build their own memorials.

Today, in a very small way, I understand Ron’s unrelenting sorrow for being wrongly shamed for the acts of a few and/or for doing what national leaders sent them to do.  More recently, police officers who serve their cities and states only to be repeatedly painted as racists by a media bent on dividing us from our neighbors when our national security in no small part depends upon the ennobling command “to love one another.”

As a responsible citizen and as a witness, causing no trouble and joined by hundreds of thousands of other fullhearted Americans on the Ellipse in Washington on a cold January day, I am being painted by the media with the same brush used for the few provocateurs who entered the Capitol building.  No one knows who those few hundred invaders are, but with each passing day the media’s rush to judgment, vitriol and indiscriminate shame rise to a stunning new level.

Schooled by Peter Braestrup’s The Big Story and journalist Ben Bagdikian’s The Media Monopoly, Ron’s distrust of media was a constant starting when Walter Cronkite, “the most trusted man in America,” broadcast his CBS report from the safe side of the Perfume River in Hue, Vietnam, after the Tet Offensive.

Ron heard Cronkite’s report on Tet in real-time for he was there. He knew Tet, a massive and bitterly fought battle at the Vietnamese New Year against the communist North Vietnam forces was a decisive victory for South Vietnam.  However, Cronkite declared Tet a “defeat.” 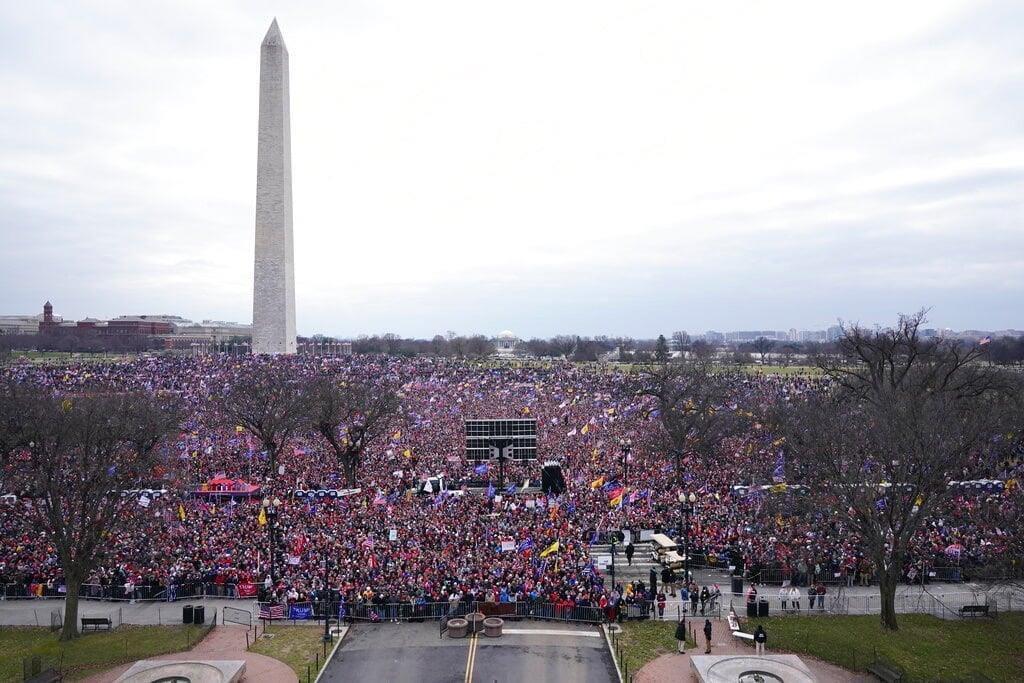 Cronkite’s big lie clearly gave aid and comfort to the communist enemy and often is cited in histories as the turning point in the war. It wouldn’t be long before America conceded to the communists and left the South Vietnamese to fend for themselves as the hope for freedom collapsed. Later, smugly and safely close to death, Cronkite proudly disclosed he was a secret proponent for “one world” governance.

Upon returning home, Ron found solace and fellowship in the writings of Aleksandr Solzhenitsyn (1918-2008), whose life was animated and defined by his dealings with communism in his homeland.  Of the media, he said:

Such as it is, the press has become the greatest power within the Western World, more powerful than the legislature, the executive and judiciary. One would like to ask; by whom has it been elected and to whom is it responsible?

Though I haven’t always agreed with Trump’s public persona, platforms are more important than speeches and style. Bottom line Trump is the embodiment of a raw independent Americanism that is impossible to enfold into a single world government, but he is much hated by utopians, who see the planet in peril and the world without nations.

I walked the massive crowd the morning of January 6, 2021, all around the 54-acre park known as the Ellipse and the Washington Monument.  Tens of thousands of people came from all over the country and they looked like me–just there to witness history on a decisive day, when many of us knew that previous national icons and notions are likely to change from that day forward.

The preview of what is in the offing has been demonstrated all summer as public memorials and statues were cast down by people, who likely don’t know or care about the why and how of those historical mementos placed to remind us where we have been so we might know where we are going.  Without a historical compass, one simply walks in circles over the Earth in their time.  As President Wilson said:

President Woodrow Wilson, What is Progress, 1913

I returned home and began to watch the news feeds.  There was no coverage of the massive number of regular Americans who came to the Ellipse, of the singing and praying, the sense of cordiality and fellowship amid a sea of flags.  There were blue Trump flags, American flags, Gadsden “Don’t tread on me” flags but there were no Rebel flags as I walked the grounds.  True to form, I shouldn’t have been surprised to see the only flag image on an international news feed covering the assembly as that of a man, who appeared to be inside the capitol, carrying a Rebel flag!

This year we were alerted to cyber invasion by Social Dilemma the documentary that “explores the rise of social media and…its exploitation and manipulation of its users for financial gain through surveillance capitalism and data mining.”  For the first time in history, Big Tech, by artifice with their omnipotent computer presence has gathered intelligence on individual Americans allowing a separate tailor-made news feeds to be designed. Each of us has our “truths” delivered by click and this has most effectively served to divide us as a nation.

The division goes beyond holding differing solutions to common problems, which has always occupied those who vigorously seek common ground, compromise and ultimately solutions. It goes to molding and then transforming us as a people into something unrecognizable especially to those who believe in the eternal unchangeable truths.

I write because I am saddened by the reigning media demonization of all who came to our Capitol city as capitol crashers, occupiers, and – yes – worst of all, racists. My motivation was to make the pilgrimage to DC drawn from a deep love of country and the American people, for all those who want to become independent, live at liberty in this “one nation under God” (not man) and aid their fellowman at home and across this World.

I have fought to remain independent and not interdependent with other nations – to not be blended into something unrecognizable from the history that once powerfully joined a diverse mix of people in one place based on the idea that every human being was valuable no matter how wanting, and that through hard work and industry we could live a life free of tyranny.

I will always appreciate Trump despite the unrelenting bullying he received in our name and for our nation.  As for me, I will miss having a voice among reasonable people who appreciate arguing the point in a thoughtful informed discourse to get at the truth no matter how elusive.

I concede to the new transformed nation, as the next generation takes on leadership, but one last time I wanted to come to the place that once allowed a small person like me a voice. For this time forward, I, like Solzhenitsyn, will resolve to live my life with integrity and I invite those of you who still long for liberty to join me: Let your credo be this: “Let the lie come into the world, let it even triumph. But not through me.” 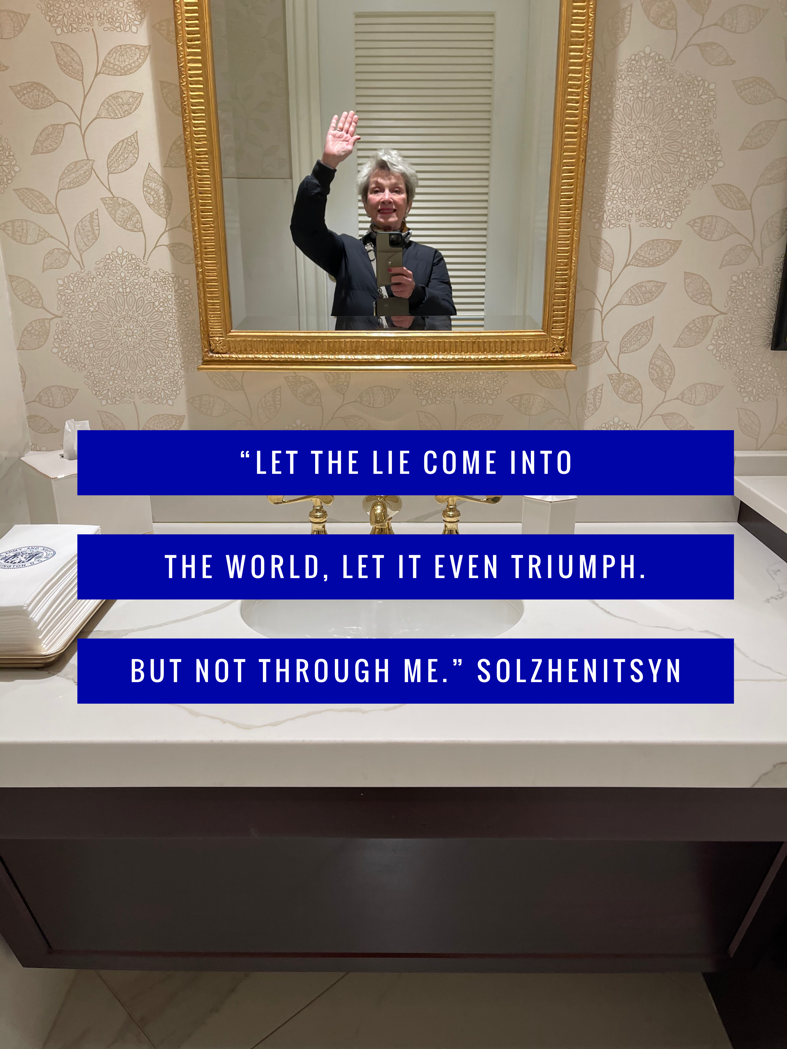 ← Prev: Is Artificial Intelligence Thinking For YOU? Next: CONTRASTS IN COURAGE: Biden Cowers Where Lincoln Stood Tall →

May 10th marks the 88th anniversary of the infamous Nazi book burning of over 25,000 books considered “un-German” in...

END_OF_DOCUMENT_TOKEN_TO_BE_REPLACED

Recently my friend Dominique and I motored to Evansville to say good-bye to Ray Vescovi who died at age 91. I never...

END_OF_DOCUMENT_TOKEN_TO_BE_REPLACED

Step One: Buy the Land

As Colonel was in his last days I was able to tell him that I was going to build a library in his honor. I like to...